With the same spacious soul-twistingly sweet tones as found in Slowdive’s most sedately compelling singles, the soundscape is absorbing from the first hit. Neal Gray held back on the distortion and abrasive sonic effects to create a transcendent soundscape which is beguiling and cathartic in equal measure. In a time where tranquillity is hard to come by, I sincerely recommend these tracks as a staple for your playlists.

Neal has been playing guitar for close to 30 years and runs his own production studio. Working as a film composer under his birth name, Neal has composed for over 15 independent films.  Neal has a wide range of influences across many genres of music to include bands like Smashing Pumpkins, Hum, Slowdive, Jimi Hendrix, Stevie Ray Vaughn, Metallica, and Trent Reznor. As a film composer, he looks to Hans Zimmer, Howard Shore, Danny Elfman, and John Williams for inspiration.

Amelia Vandergast / ANRFACTORY: "In a time where tranquility is hard to come by, I sincerely recommend Neal Gray’s tracks as a staple for your playlists."

Neal is currently working on writing and recording new music. His latest single "Not Alone". All of Neal's music is available on all major digital outlets worldwide. 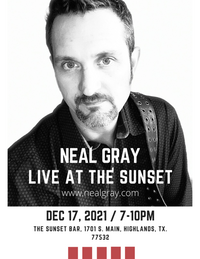 Come on out for some live music and good times! Playing yesterday's and today's favorites as well as new all original music :)